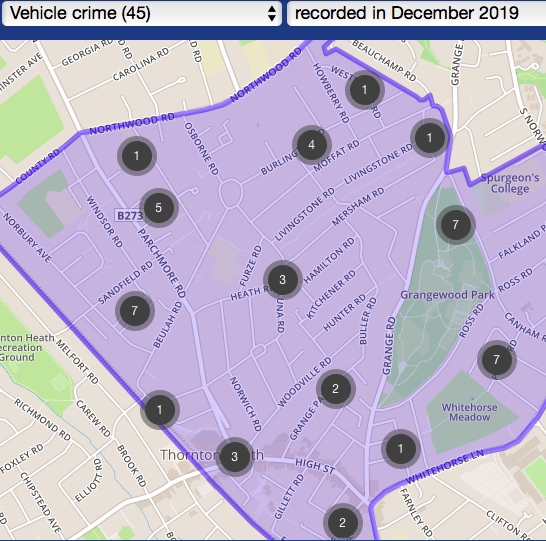 There were 168 crimes reported in the Thornton Heath ward in December and over a quarter involved vehicle crime.

Police received 45 vehicle crime reports in December 2019 up on the same month on the previous year in 2018 where only 32 featured.

Overall during last year 2,194 crimes were reported in the Thornton Heath ward between January and December 2019 with 287 involving vehicles. This compares with 185 in neighbouring Bensham  Manor and 227 in West Thornton. The ward of Thornton Heath is ranked in the top four worst for vehicle crime in Croydon.

The statistics for January 2020 aren’t out yet but in January 2019 there were 50 vehicle related crimes.

Many neighbouring streets were targeted during December’s car crime spree with residents reporting suspects and handing over CCTV to the police.

POLICE USE DECOYS TO CATCH CRIMINALS

In the streets around Grangewood Park there were 17 cars targeted with many hit in adjacent roads on the same day and night including: three in Parry Road, three in Michael Road, one in Egerton Road. Similarly  two in Grange Road the same in Wharncliffe Road and one in: Wharnclife Gardens, Falkland Park Avenue and Hythe Road. There were two in Luna Road, and one in neighbouring Livingstone Road, Speke Road, Upton Road and Penrith Road and Westbrook Road.

Three in Bedser Close, one on Beulah Road and Sandfield Gardens, Wychwood Avenue and Coates Close

Two on Fountain Road; two on Hallowell Gardens and one in: Newnham Close and Goulding Gardens.

The  theft of catalytic convertors is a soaring and linked to organised crime because the rewards are so high as criminals cash in on a boom in global precious metal prices. These metals — platinum, palladium and rhodium — are used in converters to capture noxious gases as they flow through a vehicle’s exhaust system.

The result is a bonanza for criminals, who can strip out a converter in minutes.

Once stolen, the converters are offered to unscrupulous scrap-metal dealers for £200 or more a time.

Toyota, in particular, is suffering because of the vulnerability of its popular Prius and Auris models. Other easy targets are SUVs and vans as they are high off the ground so easier to target.