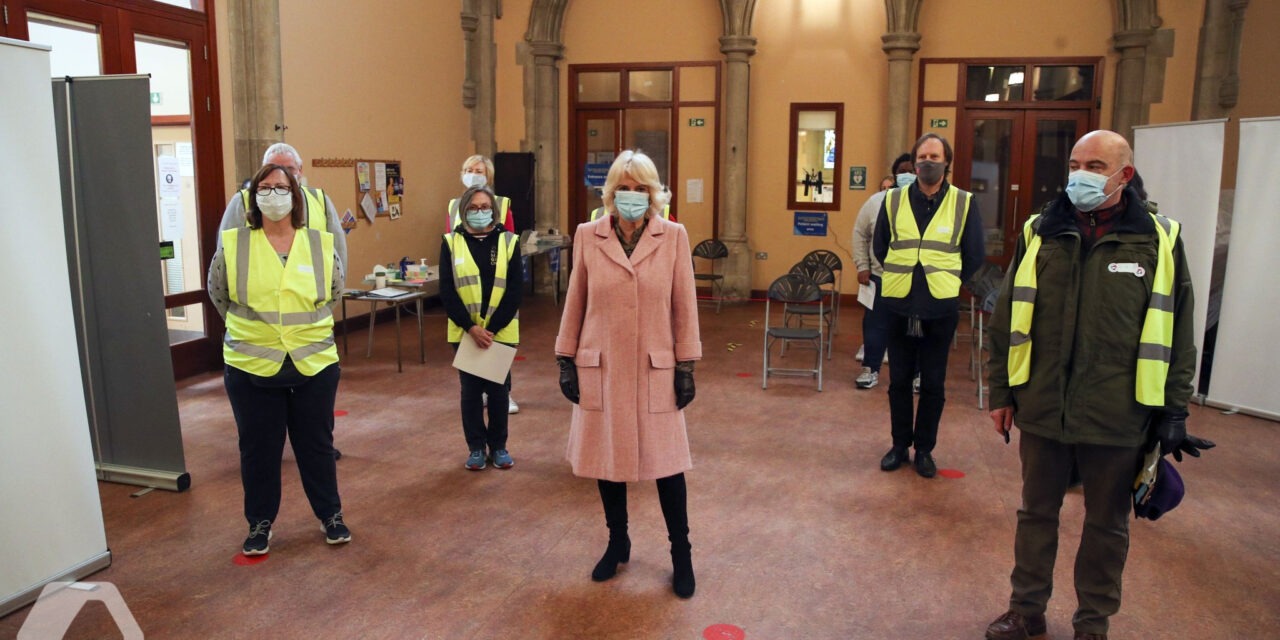 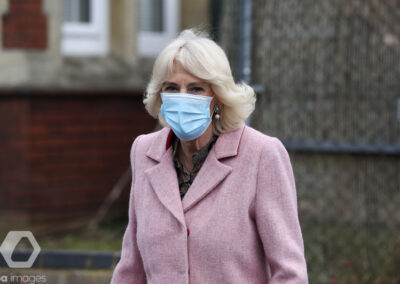 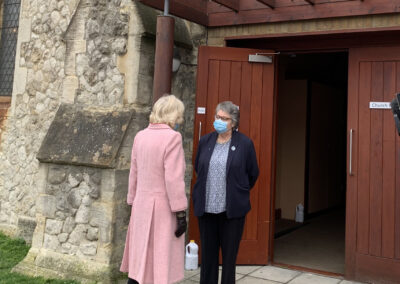 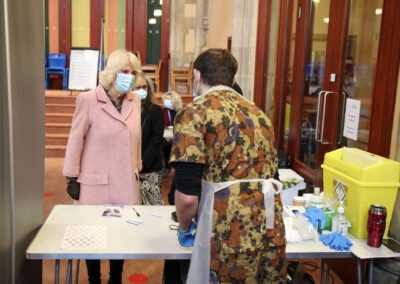 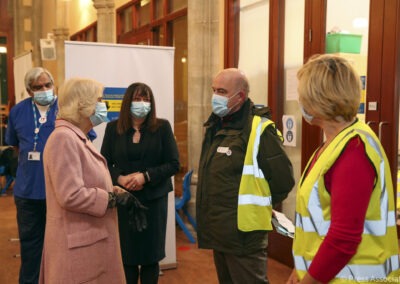 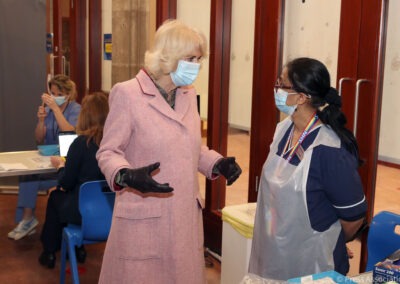 Insight in to workload 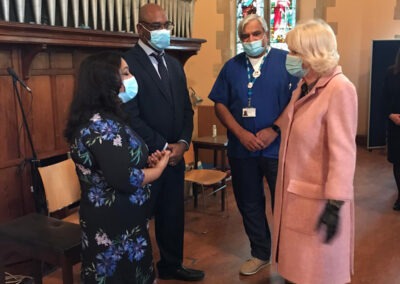 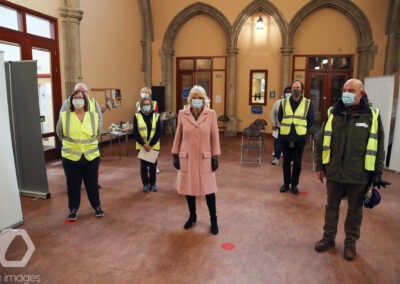 The Duchess of Cornwall  shared her dislike of needles  when she visited Thornton Heath today to pay tribute to the borough’s vaccine heroes.

Camilla who continued the royal family’s prominent support of the UK’s vaccination rollout as she carried out an official engagement at St Paul’s Church,  said she suffered no side effects from her Covid-19 jab, and it was painless even though she dislikes needles.

She also heard how misinformation was playing an obstacle in delivery of the jab locally  and that 30 per cent of people, particularly among the black, asian and ethnic community, were refusing to take it.

Frontline care worker for the elderly Sabina Eze, 51, told the duchess she had put off having the vaccine as she was scared of needles.

“I am really afraid of needles but all my colleagues have been pushing me to do it, so here I am.

“I have to do it now. It’s the responsible thing to do.”

Camilla, who had her first coronavirus jab last month, like the Prince of Wales, spoke to NHS staff, administrators and volunteer marshals, and met members of the public receiving their injections at the church.

St Paul’s is being used as a centre for administering the jabs and has delivered over 13,000 vaccines to protect Croydon residents from Covid-19.

The duchess, who was wearing a medical face mask and a pink tweed Anna Valentine coat, chatted to Thornton Heath GP Dr Agnelo Fernandes, leading local efforts, about her own vaccination.

She said: “No side effects and it didn’t hurt and I’m not a lover of needles.”

She joked to staff: “Have you had anyone sitting down and then legging it out of the room yet? No? Good.”

The duchess asked: “Are you having a lot of numbers coming in? What are your main problems?”

Camilla was told misinformation was an obstacle and  replied: “Social media is an issue, isn’t it?

“The misinformation put out there – it just helps talking to your friends and colleagues about how easy it was.

“It may encourage them. It’s good to see the community leading by example.”

Dr Fernandes said: “It’s not easy because this is a deprived area and we have a high ethnic population as well

“We have a high degree of hesitancy as well. But despite that we have been doing really well.”

He said they were dealing with a rate of about 30 per cent  of people who did not want to take the vaccine.

He added: “We are working on different ways of combating this, with community leaders and faith leaders, giving them information to make an informed choice.

“There is so much disinformation and conspiracy theories. I am on several BAME groups and what is out there, particularly on social media, is just shocking.”

He said they were able to vaccinate about 400 to 500 people a day with the Oxford/AstraZeneca vaccine, but fewer with the Pfizer/BioNTech, given the time patients needed to wait afterwards.

After the visit Dr Fernandes, described the Royal visit as a ‘wonderful boost’.

The duchess also spoke about the Duke of Edinburgh’s health, saying her 99-year-old father-in-law was “slightly improving”.

Answering a question from Anne Sheehan, who works as a receptionist at the centre, Camilla said of Philip, who has spent 15 nights in hospital and is undergoing tests for a pre-existing heart condition: “We heard today that he’s slightly improving. So that’s very good news. We’ll keep our fingers crossed.”

The royal family has been vocal in its backing of the Covid-19 vaccination, with the Queen encouraging those hesitant about it to “think about other people rather than themselves”.

In January, Buckingham Palace took the rare step of confirming the Queen and the Duke of Edinburgh had both had their first dose of the vaccine, and Clarence House confirmed the same for Charles and Camilla a month later.

After the visit Lay Preacher Gill Borthwick, who welcomed Her Royal Highness to St Paul’s said: “ It was a privilege to welcome the Duchesses of Cornwall to St Paul’s this morning and then to introduce her to Dr Fernandes and the team.

She spent some time talking to the practitioners, those in the queue waiting for their jabs and visiting the individual  cubicles.

“It was especially nice as the church is celebrating 150 yrs this year. Everyone in the centre is working as a team and it’s a joy to be part of that and to truly be a church in the community.”

The NHS in South West London has delivered over 360,000 vaccinations to date. 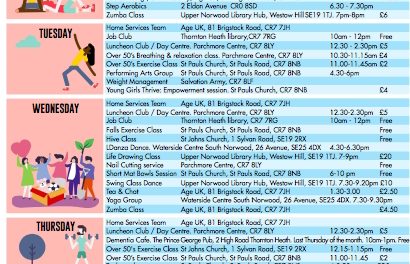 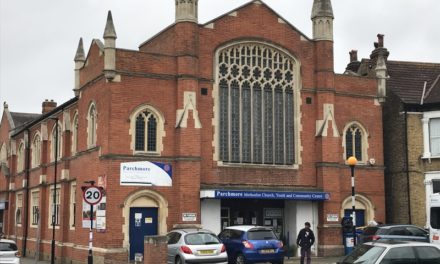 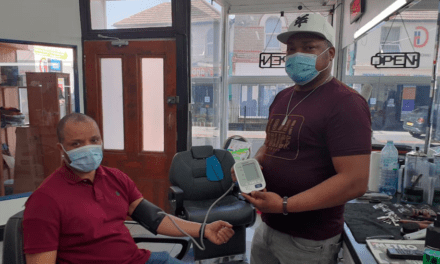